We have released the Version 1.2.4 of the popular POI4XPages framework. The new release contains the following new features:

The document control has a new property called tables. If a table is defined, POI4XPages will replace the existing table on the document with this new tabel. See the example how it works -> docx_document_table.xsp

Since version 1.1.6 is the Apache POI API available to the programmers. But in some situations it’s needed to execute Actions with privileged access. To give you the power of this in your hand, we introduce the AbstractPOIPowerAction.

How it works? See the sample file_upload.xsp and the Java classes.

3. Export Views as CSV or Workbook

You have the view designed and need the data as CSV or Workbook? The SimpleViewExport provide this behavior. 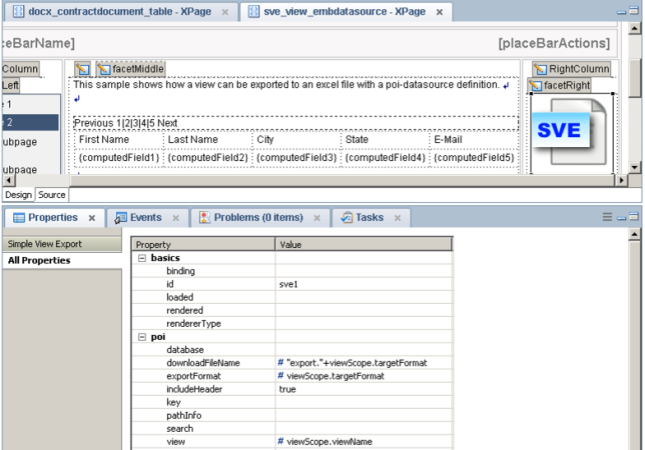 Examines the example database. See what you can do with all the controls.

Visit the install guide and the documentation.

Report bugs and request on GitHub.

And as always… HAVE FUN
Christian

Posted by guedebyte on September 25, 2013 in Documents and Spreadsheets - Tutorial, Java, OpenNTF, XPages

The “ninja-style” programming model by WebGate

First I’ve to excuse that we are so selfish to call our programming model ninja-style. It was happened based on the fact, that we have programmed ninjas in internal programming course. But the term ninja-style was established and if you gave something a name, it’s very hard to change it (Maybe you have seen Monster.Inc by Pixar, then you know what I mean).

Our intention is to make programming for XPages as much fun as possible.  And fun means in the case of programming: Having success, with less of effort and stress.

But the ninja-style has also to do with leaving the comfort zone and go out from this protected workshop in which the most of the domino developers where living. XPages requires a complete new set of skills. On the front end part are you faced with: HTML5, JavaScript, CSS, DOJO (and that’s only the beginning) and of course SSJS for the binding part. On the backend is Java the most required skills, that you should have. But you have also to learn about data sources, controls, data binding and something called JSF life-cycle.

Definitely a lot of topics to cover and the most of us are not geniuses, specially universal genius. It’s a matter of fact that it is easier to split and separate the topics. Because of this we have introduced the N-Tier architecture to our programming model. We have separated the front end stuff, from the back-end stuff.

Typically our front end developers are brilliant in arranging all the controls in the XPages and they are mostly virtuous in JavaScript, CSS and Dojo. They know about the “beans” as far as they have to know how to use them as API to the model and the business logic. They don’t care, how object are loaded and stored, they don’t care about how processes and logic are executed, as long all is working correct.

The back-end guys do all the brilliant stuff with the model of the data and all the processes. Mostly they are Java Cracks or on the way to it. They care about good backend performance and have read the book “design pattern” by the gang of for. No interface and connection to any backend is to complex for them, but do not let them do any HTML stuff.

But where are the storage guys?

At this point, some of the core features of the XPT cames to action. The DSS of the XPT solves all the storage stuff.

But keep this: Having success with XPages has to be about simplification. Our first step was to separate front end from back-end.

We have released an early beta of the XPages Toolkit, called beta1 on OpenNTF. A short time before I was going to the hospital for a heart revision task :). But the XPages Toolkit need some explanations about the why and what.

The XPages Toolkit (in short XPT) is a extendable Extension to the XPages Runtime and the Extension Library. The XPT contains a strong core for a programming model that we have introduced at WebGate as the ninja-style. I will blog later this week about this programming model and I will also make some snippets to this available.

But what contains the XPT:

And it is extendable. We have designed the XPT to make it easy to plugin other solutions. I will cover this topic also in a separate blog post. But in short, I think there are some many good things available under apache licence. Or think about the charting in dojox, its one of the things that I miss as a good UI Control. I know that there is a great OpenNTF project available from Julian Buss (YouAtNotes xCharting), but why not integrate the code into a plugin?

All the best
Christian

PS: Heart revision task was successfully completed and I have a good recovery time.

Posted by guedebyte on September 23, 2013 in Architektur, OpenNTF, XPages, XPT

I woke up this morning an my first question was. Is it true? Really? Then I hand over to twitter and my mail account… Yes it’s true. I was yesterday nominated and elected as the new chairman of OpenNTF. A dream has become true.

OpenNTF is one of the most vibrant open source community. It’s a global, multinational and multicultural community with members in nearly each timezone of the world. My first year at the board of OpenNTF was incredible and I was surprised what a strong impact OpenNTF has.

Over a decade (I’m not quite sure in this fact) has Bruce Elgort OpenNTF developed to this strong community. It’s a great honor to follow his path and working with the directors of the board to make OpenNTF even more successful.

Thanks for all trust and credits.

Learn more about OpenNTF and the people behind.

Posted by guedebyte on September 20, 2013 in OpenNTF, SocialBusiness